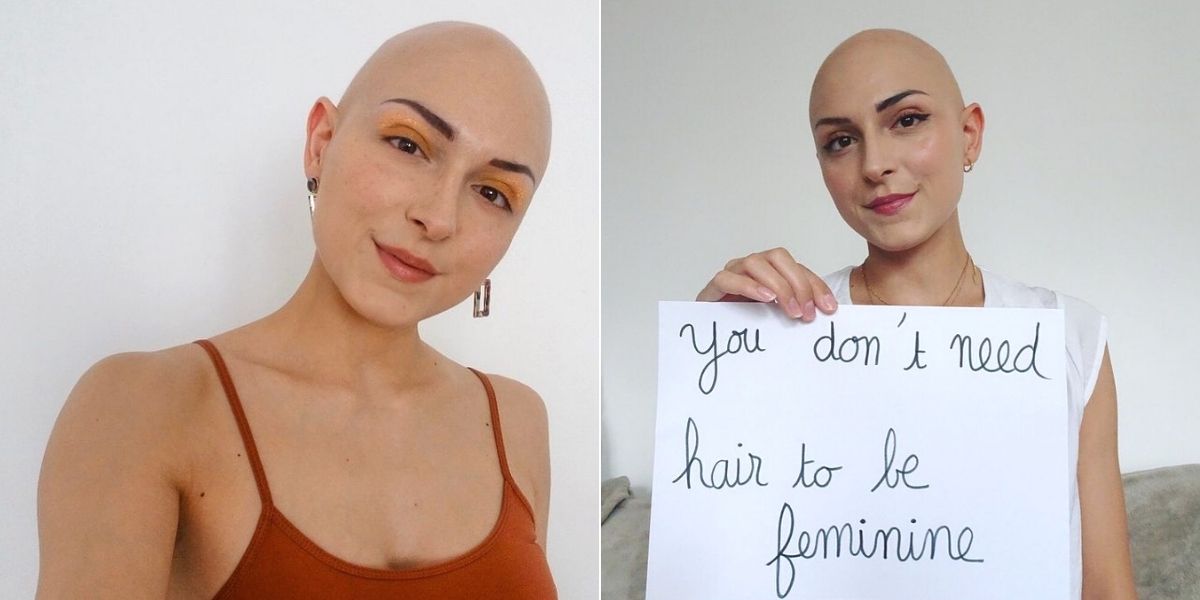 «Being bald doesn’t make you less feminine»: the story of Elodie and her alopecia

«Try to look at bald people just like you would look at redheads, blondes or brunettes. Life is beautiful, with or without hair»

It was her parents who noticed. First, a fine hair; later, but as if in a hurry, the fall began to leave holes that showed the skin of her head. «When they think about that moment, they didn’t understand what was going on,» says Elodie.

Almost suddenly, all of her hair disappeared. «Around the age of six, it reappeared in the form of patches.» Then it would fade again.

By then, she had already gone through numerous medical consultations, listened to dermatology specialists, and tried treatments. “They were ineffective. Nothing worked. « She and her family just had to get used to living like this. «You had to accept things as they were,» she recalls. «You cannot change the inevitable.»

Alopecia Totalis is a skin condition that affects the hair and hair on the body. The immune system attacks the hair follicles thinking that they are foreign elements, and destroys the hair.

It is a rare bird: its origin is inexplicable; common causes or patterns of development have not been found. There are those who point to stress as a catalyst, because it weakens immunity. But Elodie doesn’t remember passing it when she was just beginning to speak.

Above all, alopecia is unpredictable. It can go away, but only to come back at some point, because there is no cure. It can affect more or fewer areas of the body. To Elodie, it reached almost all of them: «Even though I still have my eyelashes, and that makes me happy.»

A smile emoji accompanies her words. Her story is as exceptional as her luck. 2% of the world’s population lives with alopecia, but only 20% of it developed the total type – when the fall affects entire parts of the body – or universal – absolute loss of each hair.

«I don’t remember exactly if at some point I lost all my body hair, but now I do have some on my arms and legs.» And that adds another side of happiness.

While thousands of women around the world fill the stretchers of beauty centers wanting to make the hair disappear from their cheeks, mustache, browbones, their four limbs and other places … Elodie dreams of natural human hair.

“When I was little, I wanted to be a hairdresser. I always combed all the dolls. It touches me when I think about it now ”.

During school, she began to question why she didn’t see more people like her. “I don’t have bad memories of that time, despite looking different. But in classes, the street, anywhere … I was the only one like that. It was very weird. I grew up in an environment without seeing bald or even different people ”.

Bald women have been classified in social mythology as an abnormality. TV, fashion, bus shelters on the way to Elodie’s house in Lyon, magazines, pamphlets, all of them repeaters of the same stereotype of beauty, that of the Photoshop woman: white, retouched, without wrinkles or stretch marks … and with a shiny and lush mane.

– She is Tessa Hansen, a young woman who is allergic to water and her own tears

It would be inevitable, as one grows in this world, to ignore why one is not represented in it. Or wonder why, among so many people, paintings, caricatures or monuments, no one is the same as you.

And, as you get older, realize that there are more people like you, but that in the generally accepted stereotype, you have no place. Which of the two scenarios could be more disturbing?

«I think this is all unfortunate,» Elodie says. “Stereotypes are bad, because with them people have difficulties to understand reality. The world is not so simple… You cannot classify people in specific categories and that’s it ”.

Because of alopecia, the standardized and unfortunately defined concept of femininity has been rethought many times. Her story has also made her understand that the world lacks understanding of diversity.

“They have taught us not to embrace her, to ignore her. I think it is difficult to understand the concept of femininity when it does not encompass diversity. Femininity should not be linked to long hair, something that often happens.”

She lived it herself: “One day, a man who worked in a restaurant said to me: ‘Hello, little boy,’ and he repeated it twice. I felt anger. Just because She has no hair does not mean she is a boy. «

«Sometimes I felt less than other girls who did have hair»

Arriving in high school, being different from the rest «started to get tough, tiring,» she recalls when she thinks of those times when she was uncomfortably the center of attention.

“ I was 12, 13 years old. We wanted to be beautiful, to be fashionable. I was the only one with bandanas or headbands. They looked at me with big eyes, it was a challenge for me. Sometimes I felt less than other girls who did have hair.”

Her words are reminiscent of those of the US congresswoman Ayanna Pressley, who in early 2020 revealed that she has alopecia. The day she was completely bald, she had to participate in the impeachment against President Donald Trump. Although she decided to present herself with a wig, she felt “naked, exposed, vulnerable”, she recounts in her testimony:

«I did not want to go to sleep, because I did not want the next morning to arrive (…) when I would meet a person in the mirror with whom I felt increasingly strange,» she narrates in the video.

Her hair had become a political statement. As a black and dreadlocked legislator, her hairstyle symbolized a rallying cry for the African-American community and hair diversity. The girls approached her gratefully for those braids, she remembers nostalgically.

Although more and more women dare to publicize their alopecia, the social and aesthetic value ingrained in the female hair can reduce self-confidence or security, whether you are a woman in a chamber of deputies or a teenage student.

“When something like this happens to you, you can sink and wait while you forget to live… Or you can accept it, because it cannot be changed. I got tired of waiting «

Then, at 15, to feel part of the scene, Elodie started wearing a wig. “Suddenly I discovered how incredible it was to go unnoticed. It was a very important step for me. I liked being like everyone else. » When he turned 18, she was no longer separated from herself.

Mathematics, science, syntax, English, athletics, chemistry, art, history. Educational programs – and those who exercise them – often forget to promote inclusion and diversity as cross-cutting issues. At least, until a bullying situation occurs in the classroom, and that is at best. Are not values ​​equal to or more important than knowing how to add or subtract?

Thus, we grow comfortable – and probably unnoticed – consuming racist and sexist Disney stereotypes, indulging in fat phobia or discriminating against a partner because of their skin color or origin; because, although we are not the ones who directly commit the act, allowing it is also a way of exercising it.

Many young people become victims of bullying because of their appearance and are led to loneliness in class, unless they decide to try to be like the majority, as happened to Elodie.

But paradoxically, what at first helped her to go unnoticed, to appear like the rest, would soon become an inconvenience. “I couldn’t explain to people that it wasn’t my real hair. I was constantly hiding behind the wig. »

That would soon make her more uncomfortable than the idea of ​​being the only one in her environment without hair, and she began to ponder what it would be like to live accepting herself. During the next summer vacation, she grabbed her phone, removed her wig, looked at the camera, and posed.

Many of those who followed her had no idea that, in reality, the mane she wore was not hers.

“But all the messages I received were kind. After that trip, I decided to stop wearing the wig for everything and tried different styles with a bandana. I liked».

And this is how Elodie’s approach to her individuality begins: managing to turn what many would call – in a frightening tone – «disease» into a symbol of empowerment and authenticity.

“When something like this happens to you, you can sink and wait and wait while you forget to live … Or you can accept it, because it is not in your hands that things change. I got tired of waiting. It is better to transform it into a fortress, into something that you love and for which others will love you.”

«WITH ALOPECIA, YOU WONDER IF YOU ARE ENOUGH EVEN IF YOU MISS SOMETHING»

Insecurity about one’s physique and the need for constant public approval have become very frequent concerns – and obsessions. We can find out by going to Instagram or TikTok. And it is not that Elodie has overcome them, but she does admit that she feels happier the more she accepts herself.

Alopecia is not simply not having hair. It is a journey where you battle with confidence. There are ups and downs. It is fear of not being accepted. To ask yourself if you are enough even if you lack something. Today everyone knows who I am, and I feel much better about myself. I never wear a wig on summer vacation anymore, and it has become my favorite time of the year.

Ayanna’s experience coincides with hers: “In this process, when I feel least identified with myself is when I wear a wig. So I think that means that I am on the right path”, said the congresswoman at the time. The wig went from being both a hiding place from reality to, by admitting that they wore it, their passage to living.

«Try to look at bald people just as you would look at redheads, blondes or brunettes»

At 25, Elodie works as a teacher at a school. She does wear a wig there, because that’s what she wants to do. And in the meantime, learn to make a virtue of your rare bird. “I like to surprise my friends with different styles. Yesterday you saw me with short hair, but tomorrow maybe I’ll wear it long. It is simply one more accessory ”.

“Before, I didn’t like dancing or swimming. If we went to Disney, I wouldn’t go to the attractions, I was afraid that the wig would fall off. Now I don’t rush to put it on if a delivery guy comes to my house, nor do I use it to go to the gym. Nor to open the windows. Life is much better from this perspective. If someone goes through the same thing, let them try it, if they don’t believe me. You are not alone».

Still not fully understood, the rare sight of Elodie, Ayanna, and many other women, offers a valuable lesson in perspective: that of championing the fascinating and radical idea that diversity, in fact, is the norm.

«Try to look at bald people just like you would look at redheads, blondes or brunettes. Life is beautiful, with or without hair».